I had a nightmare not too long ago where I was on a plane and I didn’t know the final destination. JK Simmons was aboard and he was exceedingly disappointed with me. I was never sure why, but I did wake up with an abysmal feeling of dread. That was months before I actually saw “Whiplash,” but I did see the trailer. So it only took JK Simmons ninety seconds to haunt my dreams.

“Whiplash” is the story of an aspiring jazz drummer and his abusive mentor.   That’s it? Yeah, pretty much. It’s fairly streamlined when it comes to a plot, but anything more would have been distracting to its elite execution.   Anyway, Andrew (Miles Teller) is a quiet nineteen year old attempting to assert himself in his conservatory’s jazz program. The head instructor, Fletcher (JK Simmons), is more legend than man. People quiver at his very presence and his reputation is mythological in its intensity. Vetting through the music program, Fletcher invites Andrew to his group.

Fletcher can make Hannibal Lecter cry. His physical intensity is only trumped by his psychological manipulation. He’ll yell, he’ll condescend, he’ll even throw a chair, but that pales in comparison to how he’ll shred your psyche. Fletcher opens up to Andrew stating that having fun and relaxing is the key to success. This comforts Andrew enough to reveal his upbringing and Fletcher takes the moment of vulnerability as ammunition for later abuse. Fletcher also pits competing drummers against Andrew to elevate his potential. It’s mentally exhausting and Andrews willingness to comply also highlights some mental issues. At no point Andrew says “go fuck yourself.” 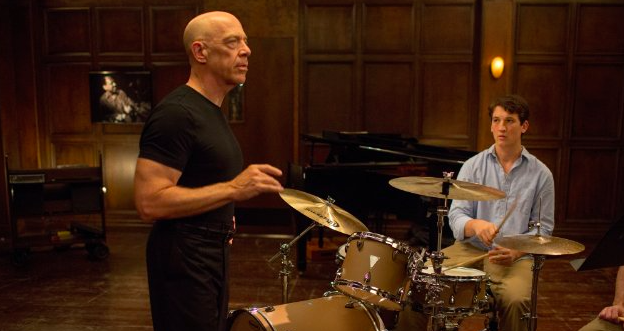 If there is anything to highlight with “Whiplash”, it has to be the performances. That sentence is semi-patronizing as every facet of filmmaking is well crafted. JK Simmons and Miles Teller are so magnetic, I could have been on fire and I wouldn’t have realized. They complement each other so well, that they elevate each’s on screen persona. I’m sure Simmons wouldn’t have been as terrifying if Teller’s response wasn’t so emotionally exhausted.  It’s one thing to see the perfomance, but its another to see its result. Supporting roles alike, Paul Reiser and  Melissa Benoist turn in a fresh serving of nuanced rational that keeps the project from getting lost in the atmosphere of absurdity.

Damien Chazelle writing and direction is so immaculately efficient that it feels like “Whiplash” couldn’t have been edited or shot any other way. There is no ancillary coverage and its dialog is economic. I have to be honest. It’s hard not to write “and it’s edited at a whiplash pace.” It’s so hard. I want to. It’s so apropos. Anyway, the collaborative artistic effort is something to be admired as I feel like Damien Chazelle had a spectacular vision, but knew not to overly pigeonhole the artists. I’m jazzed to see what he does next.*

So, what else is there to say about “Whiplash?” Is there a line that can be crossed when it comes being a mentor? Or does that methodical abuse unlock an innate potential that one can not do alone. Probably both. We all have masked genes imbedded within us that aren’t turned on until the scenario demands it. It’s really your choice to define what’s abusive or inspiring.