I feel we live in the pickiest generation of film criticism. We, as critics, have seen some amazing films and have been jaded toward prejudice reviews. Instead of treating films reactively, we’ve become proactive at finding their flaws. I always wondered if we’ll ever get to enjoy a movie as much as we did when we were the most impressionable. I’m curious to see “Jurassic Park” in a theatre again just as an experiment in enjoyment. Could I enjoy “Jurassic Park” in my 20’s as much as did when I was eight? If I saw “Welcome to the Punch” instead of “Heat,” would I hold “Welcome to the Punch” in the same regard? I’ll never know, but it’s fun to think about.

“Welcome to the Punch” is a British gangster thriller that hits every cliche of the genre with a sledgehammer. It follows Max Lewinsky (James McAvoy), a gritty detective living a life of physical and mental regret. He was on the brink of apprehending the former super-criminal Jacob Sternwood (Mark Strong) but didn’t wait for backup and was injured in the process. Years later we see Sternwood living a life of seclusion outside of the county and Lewinsky at a desk back in Britain. All seems to be going steadily along for them, even though life is unfulfilling. That is all until Sternwood’s son, Ruan (Elyes Gabelm), is arrested after a heist gone wrong. He was shot and is now in custody at a hospital. 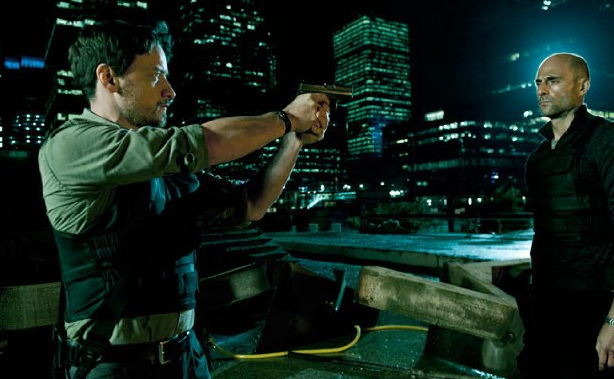 Sternwood decides to go break his son out from a lifetime of imprisonment and hopefully avoid the authorities at the same time. Lewinsky immediately sees this as an opportunity to redeem himself… or does he? Something’s fishy. There’s an election coming up and some pending legislation on gun control that could use some recent examples to point to. Keep in mind, we’re in London and the police do not carry weapons. That fact doesn’t seem to hurt the movie though, as there are still guns everywhere throughout the film.

Goddamn does this movie look slick. It’s incredibly crisp as we are enveloped in neon lights and slow-motion gun fights. The action sequences are incredibly well produced as I was never lost in the geography and it’s nice to see gunfire make practical effects explode. Character is where this movie falls off the compelling train rails though. As much as I like James McAvoy and Mark Strong, they don’t have much to do other than be place holders for action. They’re pretty much on one note for the entire film as they bark orders to go from one action sequences to another.

Is this movie bad? No. Far from it. It’s more exhausted than bad. It’s a mediocre story wrapped up in a fantastic cast and a well-produced package. It’s hard to review this because it’s a very odd movie to be released today. What perspective do I attack this from? If I’d never seen “Heat,” “Face Off,” “Lethal Weapon,” or “The Departed,” it would be amazing. If I’m comparing it to those movies, yeah, it’s not quite there. I guess its production overpowers its flaws and you won’t waste your time watching it if you’re a fan of the genre. If you liked the trailer, you’ll probably like the movie – and I liked the trailer.

EXTRA WELCOME PUNCHES
– Mark Strong was rumored to be the villain in “A Good Day To Die Hard.” He wasn’t.
– This movie’s really blue.
– So is James McAvoy going to be balding in the next X-Men movie?
– This sentence is to get this review over 600 words.
– “Shifty” is a great movie also directed by Eran Creevy.
Tweet