It is a tough thing to make a movie in a specific genre that also comments on the genre itself and be successful, but it is possible to pull off. Just a month ago we were treated to the amazing meta-horror/comedy film “Cabin In The Woods,” a love letter to everything we cherish and crave from the horror genre. It wasn’t just about appealing to those in the know though – it was also a pretty kick ass horror flick that stayed interesting throughout, creating one of the most fun and exciting in-theatre experiences of 2012. That brings us to “The FP,” a movie that takes an 80’s sports movie like “The Karate Kid,” mashes it up with “The Warriors,” and sets it in an alternate reality where the gangs settle their beefs and claimed their turf via a dancing video game called Beat-Beat Revolution (think Dance-Dance Revolution).

You might say, “Hey Jon! That sounds like a pretty funny movie to me!” and I would agree. Stretched to feature-length though, and barely (at a short 82-minute runtime), the Trost Brothers couldn’t seem to figure out how to keep the movie fresh. Instead, we are treated to scene after scene of cameras circling around people doing repetitive video game dance choreography, and characters talking in sentences made up almost entirely of expletives. Imagine someone saying “fuck” every other word and still try finding it funny the first dozen times. How about the 152nd time? Or the 268th? 301st? No?

The main joke (singular) of the movie is that it is played totally seriously. While I did admire the commitment to the concept, when that makes up where 98% of the humor is supposed to come from, there just aren’t enough laughs to hold a person’s attention. I had hope during the opening ten minutes in which a character named BTRO (Brandon Barrera) dies simply because he had lost his “Beat-Off” dance challenge to L Dubba E (Lee Valmassy), but those opening minutes pretty much hit the movie’s most absurd peak. From then on, they never really up the ante or made me care, let alone stay interested in what was going on.

After BTRO’s death, his brother JTRO (played by Co-Writer and Co-Director Jason Trost) vows never to play Beat-Beat again. Cut to a year later and the town desperately needs his help because the gangs reigning supreme in The FP (Frazier Park) are also controlling the liquor supply. The town’s duck population is therefore dwindling. 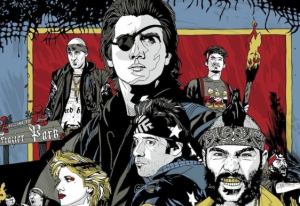 They dance and curse some more and make outdated references to paging people’s beepers (get it? No one really uses them anymore!). It’s just kind of crawls to the ending where JTRO finally faces off against L Dubba E to avenge his brother’s death. We watch yet another dance scene that is pretty much the same as the one from the opening of the movie.

Co-Writer/Co-Director Brandon Trost has a lot of big budget experience as a cinematographer on movies like “Ghost Rider: Spirit of Vengeance,” “Crank: High Voltage,” and “MacGruber.” For a low-budget film, “The FP” looks good. Coupled with the hyperactive soundtrack, the movie has the right appearance and feel. However, from a script standpoint, the most important part of a comedy, it falls into a repetitive slump after the opening scene. All of the jokes are established in that opening and just repeated throughout the rest of the film without really expanding upon anything over the next seventy minutes. The filmmakers seemed to be more focused on getting the costumes, looks, and music right, but not the heart. The thing about 80’s movies that people remember and love is that, as goody and funny (intentionally or not) as they are to us now, they seem to be coming from a sincere place in the end. You really give a shit about seeing Danielson Crane kicking Johnny in the face and winning the tournament. “The FP” seems to not understand that, and instead goes for the easy surface parody without getting to the meat of what exactly it is parodying.