I’ve been getting kickstarter updates for “The Death of Superman Lives: What Happened?” for years now. The kick-starter’s estimated delivery date was July 2013 and I received the screener in July of 2015. Movies are hard to make in general, but documentaries have an infinite well of variables ready to pounce on every aspect of production.  Looking back and seeing a dimly lit Jon Schnepp make his case for a kickstarter fund is pretty endearing. At the time, interviews with Tim Burton, Kevin Smith, and the rest of the crew were just speculation. Now, Jon Schnepp has a sharply made documentary with the majority of his objectives materialized.

“The Death of Superman Lives: What Happened?” is a documentary chronicling the genesis and ultimate demise of Tim Burton’s “Superman Lives” movie. Warner Brothers had the rights to “Superman,” and seeing the success of Tim Burton’s “Batman,” looked to resurrect the character….by killing him. Superman died in the comics in 1992 and the world was primed to see that event in cinemas. 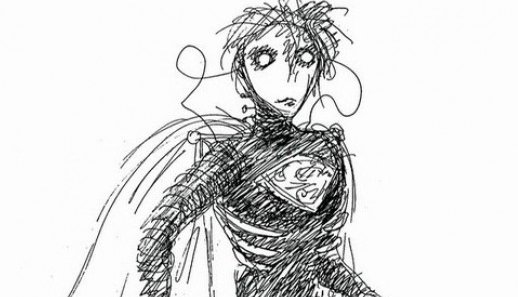 Schnepp starts in the earliest stages of pre-production. Pre-dating Tim Burton’s involvement, we hear Kevin Smith’s story about becoming the first screenwriter. Warner Brother’s hired him after his success with “Chasing Amy” and his enthusiasm for the character. A Superman script was lying around the offices of Warner Brothers, but it was apparently so unappealing, it didn’t garner much attention. Kevin Smith came aboard and the project started getting some heat.

Then we meet producer, John Peters. He’s an egotistical hollywood producer that encompasses the stereotype so much you wonder if he’s real. Having little interest in the history of Superman, he made some ridiculous demands for the story.  After a while of script development and some hype surrounding a new Superman script, Tim Burton becomes attached as director. Shortly after that, Nicolas Cage is cast as Superman.

With a script, director, and lead attached the production starts collecting the rest of the crew. This is where things start to spiral. Screenwriters are fired, then hired, then fired again, designers butt heads with the John Peters, and the budget keeps inflating. It was only a matter of time that the ambition’s weight crumbled the production. 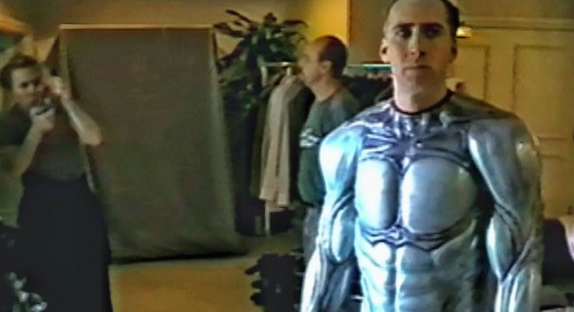 The charm of this documentary isn’t just the prospect of “what might of been,” but the creations from its talent. Several of the film’s creatives talk about the process and show off their extensive artwork from their archives. Holy hell, “Superman Lives” would have been weird. Concepts don’t rely on a budget so Tim Burton pushed his crew to make a truly fantastical Superman story.

The documentary itself is fairly slick. It’s edited at a pleasant pace, so we never stick around any aspect of the production passed it’s expiration date. Schnepp also edits in re-enactments of some of the potential imagery of the film. These little touches keep the documentary from just being a talking head movie. Having a visual reference to what the artists are talking about alleviate some of the curiosity…but only some.

The real star of this documentary is Jon Schnepp. He might not know it, but he is. He represents the audience as the wide eyed fans we are. Yeah, “Superman Lives” may have been a disaster, but the ambition alone would have carved it into the history of cinema. It’s that love and that determination that lies in the soul of this movie. To take years of his life to find out what happened to a missing jewel of the nerd culture makes this film better than just an informative expose. Congrats to you Mr. Schnepp and thank you. Keep doing what you’re doing.

– The Kevin Smith QandA about writing Superman was amazing.

– I think Ghost Rider 2 is underrated. I don’t think it’s great, but I think it’s not terrible.