“The Autopsy of Jane Doe” Review

jason December 20, 2016 Comments Off on “The Autopsy of Jane Doe” Review

Movies don’t have to reinvent the wheel. Sometimes, they should use the evolution of the medium to craft something familiar. Ala, “Mad Max: Fury Road.” Yeah, a toddler could probably pitch the entirety of Fury Road in a sentence, but it’s in its execution where the film resonates. And I’m not pointing toward nostalgia. You can still be familiar without exploiting the past. I’m not sure if that was “The Autopsy of Jane Doe’s” mission statement, but it definitely falls into that category.

“The Autopsy of Jane Doe” is the streamlined horror/thriller about a father, a son, and a mysterious dead body.  Tommy Tilden (Brian Cox) is a grizzled widow that owns and operates his own morgue with his son Austin (Emil Hirsch).  Unbeknownst to his father, Austin has dreams of leaving the corpse business behind him and eloping with his girlfriend Emma (Ophelia Lovibond). As far as Father and Son relationships go, they’re a fairly well adjusted team and do genuinely enjoy each other’s company.

Then on one fateful night when Austin is supposed to be on a date and Tommy’s supposed to drink tea and pet his cat, the police drop off a Jane Doe. The body was found buried in the basement of a house filled with dead bodies. The police don’t have a cause of death for the young woman,but the rest of the bodies were seemingly trying to escape when they were murdered.  So, in a the basement of a morgue, on a story night, two people do an autopsy on a mysterious woman. That’s a damn good premise for a spooky camp fire tale.

As you would expect, as they perform the autopsy and draw some conclusions, bizarre events start to take place. Her body doesn’t respond like a normal corpse, lights flicker, and figures appear and disappear. As they gradually unravel the mystery of Jane Doe, the danger increases.

“The Autopsy of Jane Doe” is wonderfully crafted from top to bottom. Every frame is not only captivating to look at, but is injected with subtext and evolves with the story. One thing that caught my eye  early on was how they let entire scenes play out as their characters were silhouettes. First of all, it looks cool, but second and more importantly it primed my mind to let me know silhouettes were danger free. So when uninvited threats show up as shadows, it was hard to differentiate friend from foe. That, and you also get to absorb the location and production design which is a dense swamp of intricate detail. 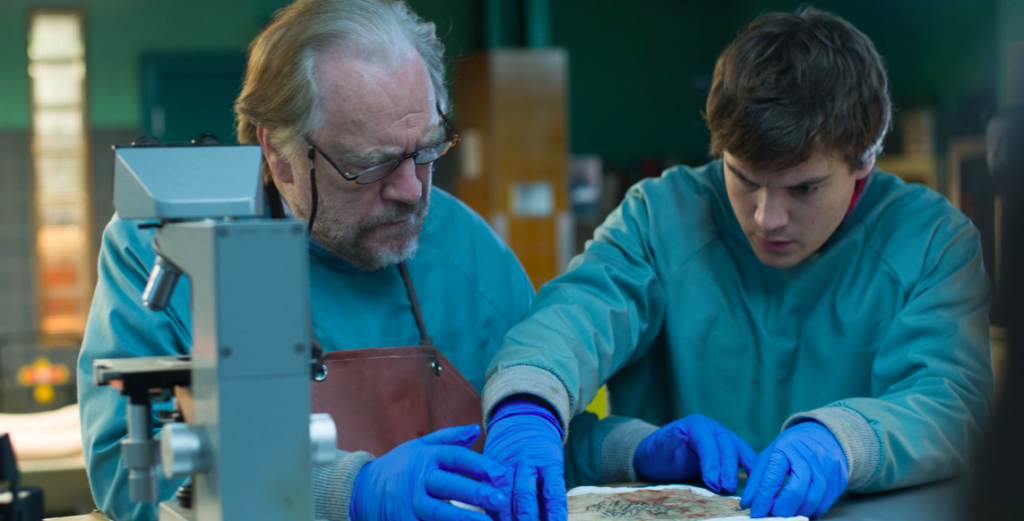 This could be a stage play. Emil Hirsch and Brian Cox dominate the screen for the vast majority of the run time. That’s a lot of responsibility for two actors in a horror film. Luckily, Brian Cox and Emil Hirsch are exceedingly charismatic and talented performers. When the stakes are as wild as a supernatural corpse terrorizing a father and son, there may not be a lot of wiggle room for development. Luckily, the script’s flushed out enough and Cox and Hirsch are talented enough to tip that ball into the basket.

All-in-all, “The Autopsy of Jane Doe” is a well crafted horror thriller. With a lesser creative team, this script could have been made into something fairly banal that you’d find in the cackles of the iTunes horror section.  Luckily, the actors and crew members approached the material with a focused sincerity and delivered something that’s better than it has any right to be.