I feel like I’ve been hearing about “Snowpiercer” for a decade now. Principle photography started in 2012 and it was released in August of 2013…in South Korea. The Weinstein company got ahold of it in 2012 with the intent of going with a wide release. Then the Weinstein’s requested twenty minutes to be cut from the run time. Well, Bong Joon-ho (director) wasn’t happy with that. Some time went by that I can only assume was filled with lawyers, test screenings, and Korean translators reiterating “Go Fuck Yourself.” Eventually, Bong prevailed and “Snowpiercer” was released on VOD with a limited release. Hell yeah…good job artistic integrity.

Anyway, in an attempt to reverse the effects of climate change, the earth has become a uninhabitable frozen tundra. The only people left alive are those that live on the “Snowpiercer;” a several mile long train that treats itself as its own ecosystem. The civilization reflects that of France in 1799. The people in the tail end of the train eat black protein blocks made of cockroaches and dress like Dickensian street urchins. Meanwhile, the people on the front of the train wear fur coats, drink champagne, and eat sushi.

Enough is enough, so Curtis (Chris Evans) and Gilliam (John Hurt) stage a revolution. Curtis is a shining beacon of the everyman determined to get to the front and Gilliam is a selfless wise man twiddled down (literally) by experience. There have been failed attempts, but Curtis, and his small band of tail enders, believe they can prevail . With the extinction of bullets, the aid of a drug addicted security guard (Kang-ho Son), and years of planning, they have the potential to get further than anyone before them.

“Snowpiercer” plays out much like a video game. Once the group reaches a train car, there’s a new challenge to overcome. They have to collect items, solve puzzles, and confront bosses only to be followed up by a cut scene of exposition. 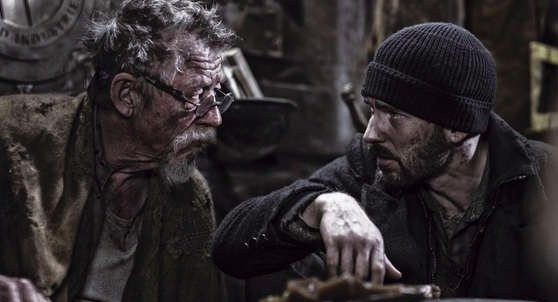 First of all, shut up, I’ve wasted several hours watching Jon find keys to infiltrate Umbrella’s lab. Second, the video game comparison is apparent, but it’s second to story and progressing details. Each character has their own incentive and development.

The production design, cinematography, wardrobe, and art direction evolve as they get further toward the front. The first 30 minutes, you barely see colors beyond black and grey with faces absorbed by stark shadows. Then, you get glimpses of color and daylight. Before you know it, the world you knew has changed.

As simple as this plot may be, its story beats hit so impressively hard that you’ll soon realize a simple premise duped you into a complex social commentary. Class warfare has been around since one Neanderthal was taller than the rest and will likely remain until the human race downloads its consciousness into a hive mind to travel the universe because earth is uninhabitable (wow…subtle). 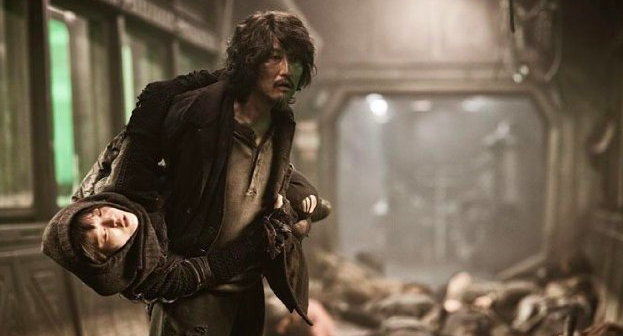 This a massively impressive feat by everyone involved.  Tilda Swinton is a wonderful sociopath, Joh Hurt oozes damaged empathy, and Chris Evans displays a rugged vulnerability that I’d follow into battle way before Captain America. I applaud Bong Joon-ho for directing an international movie with a rhythm that challenges the American standard. He stuck to his guns and the movie is better off for it. I’ve always been a fan of his and pulling off something such as this leaves me with bated breath for his next project.

– The axe fight may be the best scene of the year.

– They did their best, but Chris Evans did not look like a starving revolutionary.

– Has John Hurt ever sounded healthy?