Quinten Tarintino had a blurb about how “directors don’t get better as they get older” and I guess in a general 2-foot-wide-paint-brush sort of sentiment, he has a point. Good directors overshot what was expected of them at such a pubescent stage in their careers, that they later can coast on what made them revolutionary. Then time catches up with them and then they’re no longer relevant.  It’s tough. You have to try new things, fail as well as succeed, and then refine what you’ve learned for future projects. It’s a great deal of effort and it’s easy to just fall back onto what worked in the past. Luckily, Jim Jarmusch makes everything you just read a waste of time.

“Only Lover’s Left Alive” is the “Bitches Brew” of vampire movies (Miles Davis references to establish coolness!*). The movie revolves around a mellowed out vampire couple and their ever evolving lifestyle. Adam (Tom Hiddleston) is a musical recluse in Detroit and is haunted by depression. Seeing humans squander their potential has drained his inspiration. With a swelling depression, Adam decides to call his wife, Eden (Tilda Swinton). She’s currently staying in Tangier so I guess an undying love also needs its occasional sabbatical. Seeing her husband so forlorn, Eden takes the trip out to Detroit. 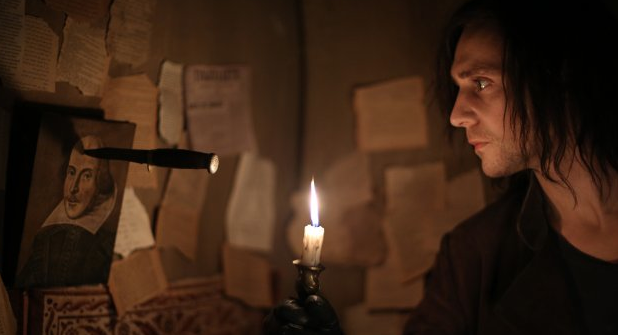 When she arrives, there is little to no time taken for Adam and Eden to get reacquainted.  They almost immediately find their romantic rhythm. They listen to music, drink some blood, and drive around Detroit. All is going well and the social activity does seem bring Adam out of his slump. Then Eden’s sister shows up unannounced. Ava (Mia Wasikowska) is a creature of whim and hedonism. She’s bubbly on the surface, but uses that innocent demeanor to get away with murder (literally).

Jim Jarmusch’s films are very distinct. Their subjects, themes, and genres are varied, but you can watch “Ghost Dog” and immediately recognize Jim Jarmusch’s thumb print. “Only Lover’s Left Alive” is a departure from what I’ve grown to recognize as his work. This is very much a Jim Jarmusch movie, but he has refined his craft to another level. It comes off more like a vampire movie made by an artist that was inspired by Jim Jarmusch. The camera moves to reveal action instead of following, cross fades are precisely coordinated, and actors move and pivot with each rather than remaining stationary.

Tom Hiddleston and Tilda Swinton are why you’d want to see this movie. There’s an incredible amount of responsibility on their shoulders as they’re almost in every frame. They play this fantasy at such a mundane and casual level that they’re funny without attempting to be. Tilda Swinton’s enthusiasm complements Hiddleston’s morbid outlook in such a way that this movie never falls into a boring abysses of pretension.

And here’s the other thing: This movie is pretty much vampires hanging out. It’s a bare bones plot of what is most likely one of the more uneventful stages of their lives. If the movie’s about anything, it’s how love endures in an ever lasting life. Much like the movie, it’s about the experience instead of the event.

All in all, “Only Lover’s Left Alive” is an expertly crafted and cool experience. Every facet of filmmaking is bagging on all cylinders and if you’re a fan of Jarmusch,  you should seek this out. Or if you hate Jarmusch, you might want to skip it. Or if you’ve always respected his work as a filmmaker, but he was never really your things, you might want to check it out just to see his evolution of a filmmaker. Or OR!, if you like Anne Rice-y vampires and hip music , then you may want to check it. Or if you hate the….ah whatever, you get it.