It’s never a good sign when you hear about a movie years before you actually see it. “Knights of Badassdom” started principle photography in July of 2010, was still considered to be in post-production in September of 2012, and finally premiered in September of 2013.  Now, that may look bad, but some movies have persevered through development hell and made a quality product. “John Dies At The End” had a similar timeline and it turned out to be something fairly impressive. So, can a movie such as “Knights of Badassdom” conquer the odds? The answer is: sort of.

After Joe gets  dumped, Hung and Eric decide to try a cheer him up by having him participate in their weekend of LARPing. Joe’s fairly reluctant to the idea of being a grown man pretending to be on a Tolkien like quest. That is until he meets Gwen (Summer Glau). She’s a lovely lady participating to help her mentally stunted brother. She may not be a hardcore LARPer, but she’s willing to sacrifice some dignity for a good time. 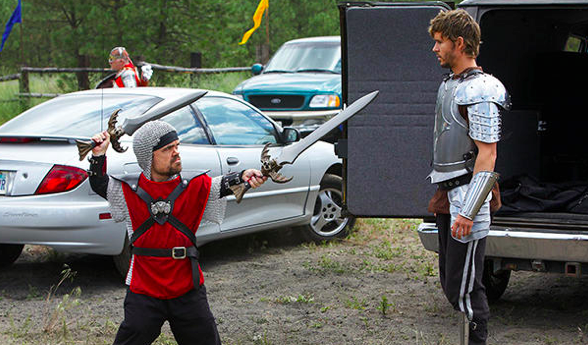 So off they go, dressed as wizards and knights, fighting other LARPers with foam swords and racquetballs. Little did they know that the book of magic Eric bought from Ebay is an actual magical artifact. So when Eric uses the book to make Joe an official Larper, he accidentally conjures a she-demon that highly enjoys eating people. The she-demon also looks like Joe’s ex-girlfriend for a minute, but then turns into a big monster thing.

Production wise, “Knights of Badassdom” had some problems. There does seem to be some genuine talent behind the camera, but I’m assuming it’s budgetary constraints hindered it’s potential. The attempts are admirable, but their intentions are slightly out of reach of their ability. Slick camera moves come off as clunky, spooky comes off as incomprehensible, and the rhythm plods instead of accelerates. These harsh critiques are just in reference to their lack of means and not their talent….I’m assuming. They could have squandered a treasure trove of equipment and time, but I doubt it. There’s genuine passion here.

How about story? Is there an upcoming paragraph about the the plot? Yup, in fact, this is the paragraph. There’s a loosely strung together plot revolving around Joe rebounding from his recent break up. I’m glad they added that, because once the novelty of the LARPing wears off, there’s not much behind the curtain. People also seemed a little too well composed around death. Friends are gutted in front of the protagonists and ,instead of running away crying, they seem adamant to quip their way through the situation. Not a necessity for a comedy such as this, but it really diluted the value of life. 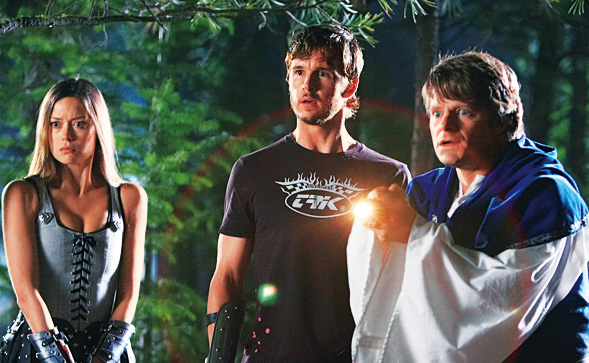 “Knights of Badassdom” hits a fairly narrow market in the LARPing community.  Can it’s flaws supersede the tolerance of it’s niche market and satisfy a broader audience? Eh, probably. There are enough goofy angsts in this nerd fest for a few jokes to get though. Even with all its shortcomings, I can not say I did not hope for our dweeb-y heros to succeed. There are way more movies that have a surplus of technical potential, but not the vision to see it through. “Knights of Badassdom” has the opposite problem which is a much better problem to have.