Initially, my review for “Joe” was going to start with a rambling paragraph about Nicholas Cage. Then I discovered Gary Poulter. Poutler played the film’s antagonist as an abusive father with a penchant for alcohol, violent whims, and break dancing. With a face carved out of petrified wood and a lumbering trudge, Poutler is either a masterfully crafted product of performance, wardrobe, and makeup or an actual homeless man…he’s an actual homeless man. His rhythm was not quite what I’ve been conditioned to recognize as acting.  It’s a casting choice like this that always makes me go: “What is a good performance?”

“Joe” stars a straight laced grizzled man named Joe (Nicholas Cage). Joe seems like a stable enough guy, but he apparently wasn’t always stable.  People speak to Joe as if his former self was a different entity. A tough son-ov-a-bitch that punched cops for fun and frequented jail more than the gas station. Alas, those days are behind him and Joe now prefers the quiet life of consistent employment. 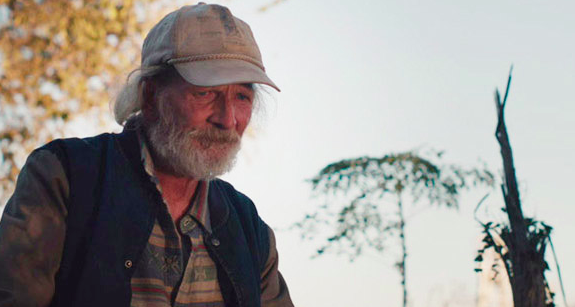 One day while poisoning some trees (Joe heads a team to clear forests for new trees. It’s probably symbolic.) a young man named Gary (Tye Sheridan) wanders into Joe’s vicinity. Gary’s a well meaning teenager looking for some distance from his father and a dash of personal responsibility. Gary’s incredibly grateful for the employment and makes the best of the opportunity. Gary’s father, however, is a violent curmudgeon that hates everything except alcohol.

For a landscape as simple as “Joe,” it’s a fairly complex story. Themes of redemption, responsibility, and forgiveness interweave on a murky backdrop. At no point can I ever really speculate where it’s going or what’s about to happen. Is that a product of sloppy writing or art imitating life? I don’t know, but it’s probably a more compelling product by not being one or the other. Similar sentiment could be said about the performances.

A good percentage of the cast are not trained actors. They add a tone of authenticity that’s hard to accomplish for the most decorated of performers. Then there are highly trained actors performing along side of them. This forces the non-actors to strive for a quality they’re unfamiliar with and the trained actors to aim for a level of realism that’s outside of what they’ve been conditioned. They meet somewhere in the middle. It adds a nice improvisational tone while adding some restraint in order to fulfill the story (unlike you “American Hustle).” 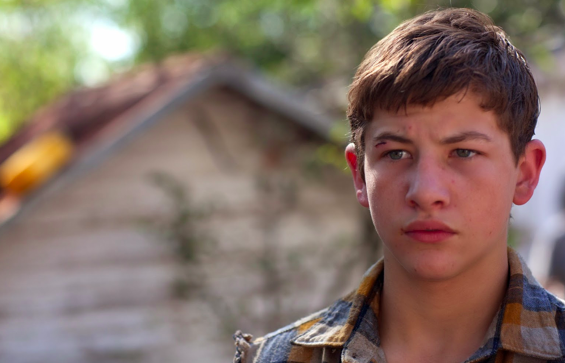 This seems to be the theme of the production. This movie attempts to harmonize the calculated with the dogmatic. Some scenes would be masterfully lit with fluid photography while others would be hand-held, grainy, and underexposed.  It’s a jarring experience at times, but there’s some beauty in that chaos.

All-in-all, “Joe” is a hard boiled tale of an unlikely role model conflicted by his own instincts. “Joe” frequently gets compared to “Mud”, but “Joe” is bit more unrefined (on purpose). Nicholas Cage is also un-ironically great. As the centerpiece of the film, Cage keeps it grounded where it could have easily went off the rails. He held his own with Poulter and Poulter kept up with Cage, so my original question still exists: what is a great performance? Is it the precise articulation of Daniel Day Lewis or is it the unsatisfying and clunky Gary Poulter? I can tell you one thing, I know way more G-Daawgs than Daniel Plainviews.

– Did you ever see “Bubble?” Check it out. The same questions apply.