This is the best I-have-a-sniper-rifle-aimed-at-your-head-so-act-normal-and-do-what-I-say-or-I’l-shoot-your-loved-one-in-the-head movie since “Phone booth.”  There’s more than just “Phone Booth?” Yup. There was “Liberty Stands Still” in 2002 with the ironically cast Wesley Snipes. I’m sure there’s a few more in the bowels of cinema, but my 12 minutes of internet research didn’t find another one.  Anyway, it’s a fun plot device that’s easy to exploit, but it’s intricacies almost seem impossible to produce realistically. Especially if you add an elaborate Piano performance in a massive concert hall.

Tom Selznick (Elijah Wood) is a young piano prodigy, but suffers from a crippling stage fight. About 5 years ago he decimated a recital and has been avoiding the stage ever since. Not until his renowned mentor dies, is Tom asked to play a memorial concert. Tom agrees as long he doesn’t have to play the notoriously impossible piece that he flubbed a half-decade ago. The coup de grace of the event is that Tom will be playing on his mentor’s custom made piano.

So, all is seeming well as the attendance is at max capacity, the conductor is supportive, and Tom is nailing the opening stanza. “Silly performance anxiety, maybe there was nothing to worry about after al-wait…what’s that on my sheet music?” As it turns out, something insidious is afoot. Tom’s sheet music is riddled with notes written in red ink informing him not play one wrong note or he’ll die. A few pages later, it tells him to run back to his dressing room and put on an ear piece. Once he does so, a mysterious voice tells Tom that he a has sniper rifle aimed at him.

If I were to judge “Grand Piano” on a strictly technical stand point, I would declare it a perfect movie. My god, did it look and sound remarkable. It is an elegant marriage of visuals with a classical orchestral concert used as a canvas. There are scenes that are so well composed that I had trouble comprehending how it was possible. I constantly asked myself things like: how did they synch the score and visuals so well, can Elijah Wood actually play the piano, or how was that shot even possible? So, great job “Grand Piano.” You’re in the elite of the elite when it comes to production quality, style, and precision. 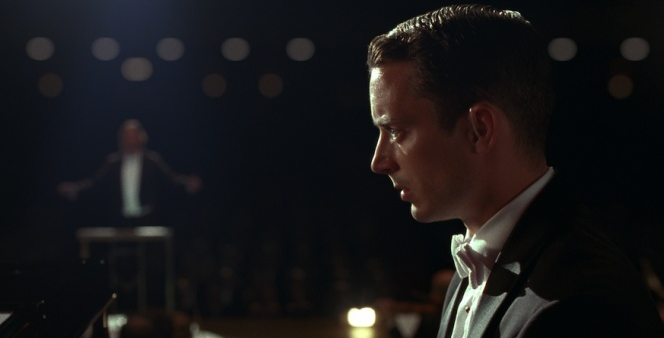 Aw man, since you opened up with a paragraph about how miraculous the production value was, you’re probably going to tear apart the story now, right? Well…not really, the stories good. In fact, it’s fairly tight. It’s just not as fantastic as everything else.  Overall, this is a really dumb critique because I’m judging something great because a separate aspect, of said thing, is greater.  It’s a good problem to have.

All in all, there is little to fault “Grand Piano.” It has solid performances, it’s own style, and it keeps the suspense at a whiplash inducing pace. There are some implausible coincidences and one too many odds defying scenarios, but they’re worthy sacrifices for the betterment of storytelling. I will seek out whatever this creative team works on next.