“Get the Gringo” – Movie Review

Underwhelming trailer. Poor title. Anti-semitic alcoholic. These preconceived notions swarmed my head as I sat down for this movie. What I actually saw was a highly entertaining story in a less-than-customary Mexican prison.

We meet Mel Gibson, a career criminal, as he is taking his latest haul across the border. The crossing goes about as smoothly as two clowns barrel rolling their car over the fence can go. He gets taken by corrupt cops to a corrupt prison called ‘El Pueblito’ and quickly starts corrupting it in his own favor. 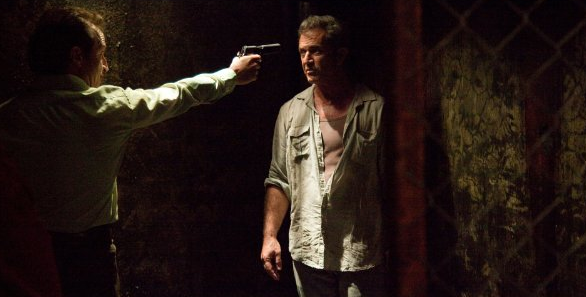 In this prison, described as the world’s crummiest mall, Mel meets a boy (Kevin Hernandez) who becomes his only friend on the inside. The boy chooses to live in El Pueblito, as his mother and father are serving 15 years for drug trafficking. He fits right in as this prison has a lot of other children, entertainment events, and market areas are like a downtown village. The boy is sharp and there is something special that sets him apart from the rest of the population. The kid delivers a strong performance and doesn’t overact. It is so easy for the kid sidekick role to be too whiney or geeky or defenseless or obnoxious. Not the case here. This is a stand-up performance that he should be proud of.

The performance by Mel is accented by his inner monologue. As he figures out key players and the steps necessary to get reunited with his money, the obstacles mount up. His voiceover adds an element of humor while allowing the narrative to evolve without seeming forced.

Only known as “Gringo,” Mel begins stealing and positioning himself in the corrupt prison. After some petty theft and a murder to save the boy, Mel makes the connections needed and is given a chance to work with one of the criminal leaders inside the prison community. The leader grants him some time out of jail and Mel really hits his stride. He loses a tail that was placed on him and impersonates Clint Eastwood flawlessly. He blows up an office in a high rise to stop people from trying to reclaim the money he stole, and still gets back in time to protect the boy and his mother.

The script is really tightly put together. There isn’t a strict adherence to the Hollywood code of script writing. The elements are mostly there but are kept fresh. There are no cheesy one-liners to distract you from the action and plot. The action is well paced and swiftly executed. There is clever humor and realistic consequences. No unnecessary cuts from the editor to hide bad acting, action, or filmmaking.