I used to work at a liquor store and I constantly fantasized about being murdered during a shift. I would stare faintly into space while holding a six pack of Molson Triple X and wish for the tranquil solace of death. He would come in and point a handgun at that cashier that never laughed, and I would run over to tackle him – but not to be a hero. So when “Fat Kid Rules The World” opens with Troy (Jacob Wysock) fantasizing about stepping in front of a bus, I was instantly sold.

“Fat Kid Rules The World” is the story of an overweight introvert named Troy and his discovery of punk rock music. He didn’t discover the genre by himself though.

A high school dropout named Marcus pushed him out of the way of the bus. Marcus is a drug addict but, more importantly, a guitarist in a band that doesn’t exist. He’s starting a new band called “The Tectonics” and wants Troy to play drums. Troy has no idea how to play the drums but seeing punk rock as an outlet for his inner turmoil, he decides to learn. Plus, the daydreams of suicide stop when he practices. Marcus even sets up a gig in five weeks that may or may not exist. 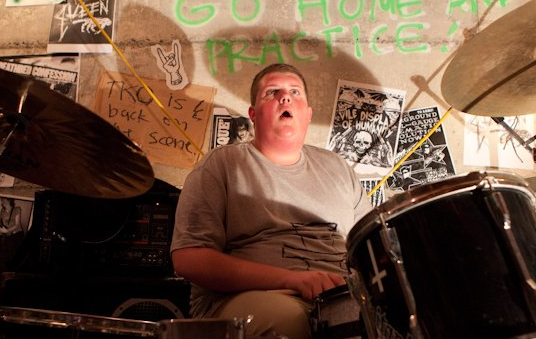 Troy’s mother recently died and his father is trying to acclimate to the change. He is a police officer with a strict sense of responsibility and authority. Troy and his brother even call his “sir.” As it turns out, he’s not a strict or manipulative father, but a loving one that begrudgingly accepts his sons’ life choices. It’s a nice change of pace in coming-of-age stories.

Anyway, “Fat Kid Rules The World” is fucking fantastic. It’s not the pretentious coming-of-age movie that gets annoyingly philosophical about high school (I’m looking at you, “Perks Of Being A Wallflower”) and it’s not the throw-caution-to-the-wind-life-ends-at-high-school comedy (I’m looking at you, every other high school comedy). “Fat Kid Rules The World” walks the line of comedy and drama incredibly well. It deals with real problems and real consequences and somehow presents real solutions that don’t induce automatic eye rolling. It’s an incredibly humble movie that inspires as well as entertains.

After this and “Terri,” I’ll watch whatever Jacob Wysocki stars in. I don’t know if anyone else can exude awkward symphony better than him. Matt O’Leary also portrays a fantastic lost cause in Marcus, but leaves enough room for charm and a smidgen of distant redemption. This film has an amazing ensemble case and they all have a good sense of rhythm with each other and the material. There’s a stark contrast in the character quirks, but they all seem to co-exist on the same screen. 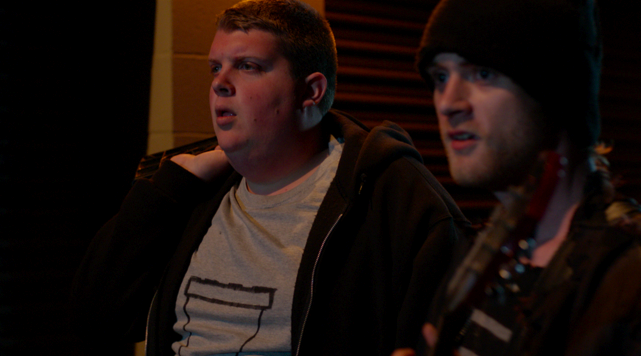 I don’t know what it is about “Fat Kid Rules The World” but I can’t come up with a single complaint about it… and that makes me uncomfortable. It’s a smart and well-adjusted film that doesn’t beat you over the head with messages of self-acceptance and responsibility. It channels the punk-rock mentality of accepting flaws (yours and others) and using the power of rock as an outlet of your anger and frustration.

Man, who directed this? He did a great job…wait…Matthew Lillard? Fucking Shaggy?

EXTRA TIDS AND OR BITS:

– Roger Ebert personifies this movie better than my entire review in one sentence: “It’s a lot better than it sounds like it has any right to be.“

– I have mistakenly written the title as “Fat Kids Rule The World” many times over. There’s only one.

– So far my favorite movies of the year are this, “Lincoln,” Cloud Atlas,” “Killer Joe,” and “Killing Them Softly.” I told a friend this and he responded with: “What the fuck is wrong with you?”