I love the way they stab that pregnant girl’s baby after the one biker rapes her but before the other one finishes. Some people binge on cake, booze, or loose women.  I believe a quote from Jett can point this review in the right direction for you… “It’s almost dark, I’m sober and I haven’t gotten to kill anyone today!”

Dear God No is a grind house film in which a group of some of the most degenerate bikers roam Georgia as free as they want to be.  They end up harassing a local doctor of anthropology until the twist he is hiding can’t be locked away any more, and then there is an even more random and less explained twist after that one. Lets both start rooting for the Sasquatch to win now.

Nunsplotation, is that even a word?

Dear God No doesn’t hold anything back.  Ever.  Our ensemble of protagonists is introduced as they are waking from an apparent evening of raping nuns to death.  Hung over and sloppy they punt a cunt repeatedly, tear a body up with their tires and then blow up the nunnery’s van.  Remember, pinkies up when you drink your PBR can shows how classy you can be.

Half of the biker gang use their real life names in this film which leads me to believe the gang isn’t acting.  (Also, their complete lack of acting is a good indicator of their lack of acting.  They all seem to have their lines memorized and as soon as the line before theirs is done they chime in with their own un-emphasized line) So once this gang of heavily bearded men got their hands on a decent camera and a director of photography, they started filming.  Script?  Unlikely.  Acting classes? Don’t make me sick. Guns and fake blood? Check. Titties? Double check.  Let’s get grinding!

An afternoon stop at the local cocaine emporium and whorehouse takes a wildly bloody turn when members of our protagonists kill their own father, and nearly everyone else at the bar.  Thankfully it’s not until after the three-minute dancing montage of women in nothing more than panties and a caricatured Nixon mask is used to open the scene.  I enjoy the seductive temptations of the female form, but the repetition, soft focuses, Nixon mask and lack of anything resembling plot development gets stale and weirder than Stiffler’s mom’s apple pie.  Every female role in this film will become topless for no less than 20 seconds.  Guaranteed. 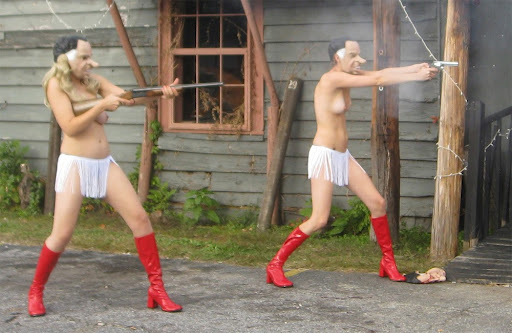 The last thing you want to see after a dream shot of a topless girl unloading a tommy gun in slow motion is some extra’s squib cables taped outside his pants.  Just give me some disbelief to suspend here guys!

The men finally realize that this bender of raping and killing might lead to trouble.  They decide to find a safe house and they take their marginally wounded comrade on the road to get him all patched up… and in the world of psycho bikers, duct tape ought to do the job just fine.  Yea that’ll do nicely.

After some rather surprisingly satisfying humor and a cop developing a shotgun-sized hole in his torso, the gang decides to finally drop in and get some explanation on our B story.  Our diametrically opposed bikers finally meet the good natured but chauvinistic Dr. who has been confusingly peppered into the story so far.  Hilarity ensues.  Probably…

Our heroes…do I have to call them that?.. take over Heir Doctor’s dinner party and proceed to rape the women, drink the booze, berate the Todd, and stab the Dr’s leg.  All under the motivation of ‘look! such a good time we are having’ that none of the actors are actually cable of portraying.  Oh yea, this is the part where they rape the pregnant dinner guest!  The fetus they end up pulling out of her is one of the better effects of the film.  If your squeamish friends haven’t passed out by this time your in for a scream fest as this scene comes to a head.

The Todd, in an effort to save the day, decides to run away.  He gets lost in the basement and releases one of the Dr’s pet projects… his wife!  He has been altering some chemicals and then I stopped following and she’s been dead for three years, who needs an explanation lets get back to raping women.   The dead demon mother loved getting raped next to her daughter and forces herself on the poor daughter.  This scene has shockingly one of the smallest amounts of BPM’s of nearly any scene.  (Boobs Per Minute)

You may not be ready to take this film to the next level so lets find a quick way out of here… What Would Shakespeare Do?  hmmm, bomb?  Plague?  Big Foot?  Lady Gaga?  Wait… what was that last one?

Yes, big foot finally makes a film appearance!  The trippy and now almost certainly Nazi related doctor’s tests must have had an adverse effect on the wild life and big foot decides to enact some vengeance. 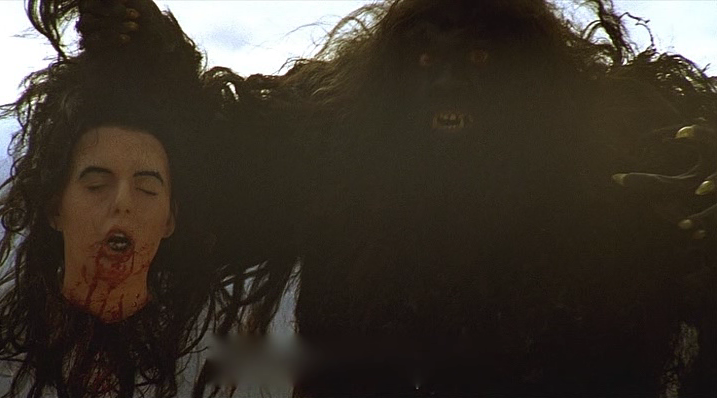 Gore and a sincerely impressive Sasquach costume effect make for a hilarious ending with a lot of shrugged shoulders.  The ‘no reason yeti’ kills the remaining bikers then gives chase to the leader who has been pursuing the daughter.  Of course she’s topless; haven’t you been paying attention?   Big foot decides that it’s an appropriate time to kill both of them.  And there was much rejoicing.

I did like this movie, but not till days later. The effects and yeti costumes were really fun and got some great responses and reactions.  The acting is my main point of contention with this one… I know grind house style films are notorious for bad acting working as part of the effect (e.g. “Troll 2” would be nothing without good bad acting), but this movie fails at being good at bad acting.