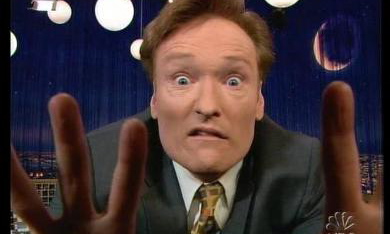 I’m a fan of Conan O’Brien . I catch his show sporadically, but each time I do I ask myself “Why don’t I watch this everyday?” Now, even though I’m a fan, I think I would hang myself if I had to work with him. He’s not a tyrannical boss and he seems like a pleasant human being, but his energy level and attention lust would be too much to bear.

“Conan O’Brien CAN’T STOP” is the documented story of what happened after Conan O’Brien left “The Tonight Show” for refusing to be pushed back to a 12:05 time-slot. At the time, Jay Leno was host of “The Jay Leno Show” followed by “The Tonight Show with Conan O’Brien”, that was followed by “Late Night with Jimmy Fallon”, and that was subsequently followed by “Last Call with Carson Daley.” With an over saturated market of talk shows, plus Craig Ferguson and Jimmy Kimmel on separate networks, NBC had lackluster ratings for their late night schedule. NBC attempted to solve this problem by pushing everything back a half hour to get the general appeal of Jay Leno back in the limelight. Conan O’Brien thought that this would cripple the quality of the long running “The Tonight Show” and stepped down as host. The whole scenario is massively intriguing but this is only the catalyst of the documentary.

As a result of NBC’s deal with Conan O’Brien, he couldn’t perform or host any televised show for a year after stepping down. Being under an abundant amount of emotional strain and hardwired for performing, Conan decides to perform a live show across the country. The show would be a mix of comedy and music that would personify Conan’s talent, but also alleviate some of his stress and frustration.

Conan is clearly morose about his dealings with NBC. Throughout the film he references the events on and back stage. “Conan O’Brien CAN’T STOP” is not a subjective look at the dealings of NBC vs Conan. It’s more of a character study of what happens to a person who has lived the bulk of his adult life in front of a camera and then deliberately steps away from it. Human beings are directly molded by their surroundings, and Conan has been a part of daily show business for so long that he would probably spontaneously explode if he cut himself off from performing.

Conan’s a handful. In backstage meetings he is loud, fidgety, and flamboyant. He tuned his personality to be so, and this demonstrates the durability of the people he works with. The most intriguing relationship in this film is between Conan and his assistant, Sona Movsesian. She’s an amazing individual as she effortlessly connects with Conan. She has the uncanny ability to take a joke, keep the world rational, and ease the hyper performer down to a grounded level.

Another relationship that needs mentioning is between Conan and his audience. His biggest fear is disappointing them. No matter how exhausted he is, he will dismiss himself from any form of comfort and jump at the chance to sign autographs, say hello to family and friends, or greet other celebrities. When interacting with fans he is nothing less than charming and cordial. He truly appreciates and loves his fans, and with everything you love, he complains about them behind closed doors.

“Conan O’Brien CAN’T STOP” is not a ground breaking piece of cinema for it doesn’t really unveil anything too mind blowing. It’s entertaining for sure, but no one from Hell’s Angels stabs an audience member towards the end. Conan has an idea, they build it from the ground up, and then they perform it. Conan’s exhausted by the end of

his tour, but it’s an overall satisfying experience and satisfaction is something he had a long time coming. I’m glad you’re back Conan, even if it’s TBS.

RANDOM SIDE NOTE
I haven’t actually seen Conan’s live show, but the word from other critics and friends is that it wasn’t very good.