The amount of emotional weight sexual exploits contain is remarkable. Romantic relationships are easily eviscerated by the mere postulation that someone is unfaithful. “Infidelity plus” is a semi-new legal defense as adultery is not (nor should be) considered a “qualifying trigger,” but if the spouse is unfaithful and demeans the faithful partner, it can be considered in a court of law. That means if a husband beats a wife to death because she was cheating on him AND she said something mean, the husband can plead a “loss of control” which is the dirty little ambiguous cousin of “temporary insanity.” On that note, let’s talk about cartoons.

“Cheatin’” is the latest feature length “Plymtoon.” Bill Plympton is an animator that seems like he’s been around since Jim Henson.  He was nominated for his first oscar in 1987 and has seemingly not stopped drawing. With dozens of shorts, ten commercials, five music videos, and six animated features, the man must have tremendous dexterity in his fingers. As the writer, director, and animator for all his projects, he acts as a one man animation studio. 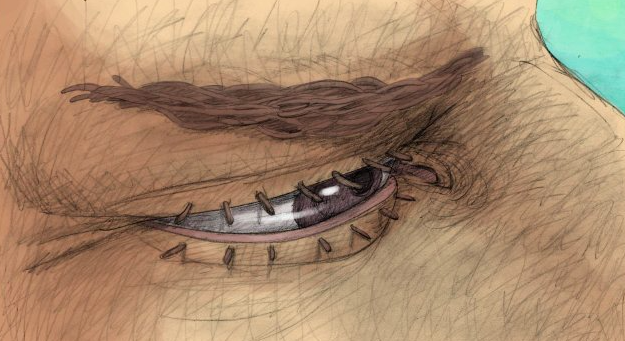 “Cheatin’” tells the story of Ella and Jake. Ella’s an elegant beauty that men can’t help but crane their necks toward and Jake is a muscular sweetheart that women fawn over. They meet at an amusement park and Jake’s ernest kindness and Ella’s vulnerability set off an immediate connection. Marriage comes just as quick as the connection and the two couldn’t be happier. Jealous of the unrequited love, an envious bombshell shows Jake a fake photo of Ella’s adultery. Devastated, Jake moves to a hotel and sleeps with any woman that shows him interest. In a Shakespearean-like turn of misunderstanding and misery, Ella stoops to things lower than depravity for her revenge.

If you have never experienced a Bill Plympton movie, “Cheatin’” might be a good way to start. They’re usually silent, pencil drawn with a somehow poised jerky-jerky motion, and bat-shit insane. “Idiots and Angels” was about a bitter loner that had wings grow out of his back for no apparent reason. Comparatively, “Cheatin’” is pretty grounded in terms of its narrative. The unbridled creativity is present as every scene is depicted with a hyper sense of whimsy in its interpretation. 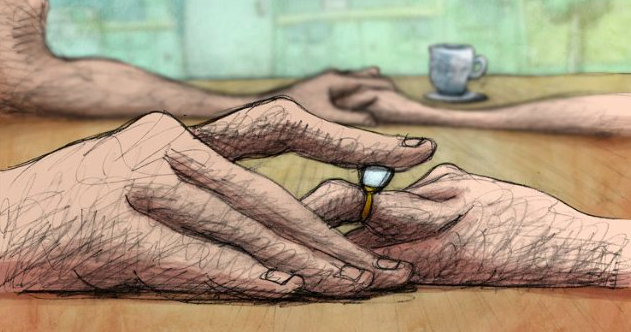 Bill Plymton movies have been progressing in their vulnerability and humility. As entertaining as “I Married A Strange Person” is, it’s not exactly emotionally fulfilling. “Cheatin’” has an emotional resonance that can touch any viewer. Now this is just an assumption, but I’m sure even the most secure couples have bouts of unfaithful paranoia.

My only issue with “Cheatin’” is the introduction of a “Soul-Swapping-Machine.” It’s not that the world of “Cheatin’” has no room for science fiction, it was just revealed toward the end of the film. My mind was primed for a more realistic take on a Plympton movie and that made my hypnotized gaze stutter step. It wasn’t a bad decision, just a tad distracting.

All-in-all, “Cheatin’” is another wondrous addition to Plympton’s resume. It’s gorgeous from the first frame to last, insanely creative, and goofily brilliant. Yeah, it may get tedious at times, but Plympton movies are about the experience of watching rather than what you’re watching. Plus, you’re watching a film by someone who has not only perfected his unique craft, but refuses to stop at perfect. The man’s living his dream. Here’s to you Mr. Plymton.

– I met Bill Plymton at a Comic-Con once. He was incredibly nice.

– “Cheatin ‘ ” was partially funded through kickstarter and used a new digital painting technique. It makes a difference. The movies beautiful.

– I fucking love “The Animation Show.” It’s a collection of insane animated shorts. Check them out. NOW!