Once in a while, it’s nice to see something as simple as “Cheap Thrills.”  I just saw “Captain America: The Winter Soldier” and the amount of twists, characters, and predisposed information needed to comprehend is fairly labor intensive. I barely had to know anything to enjoy “Cheap Thrills.” It’s a stripped down nasty piece of storytelling with a cast of about four and a handful of locations. It’s a testament to minimalism…brutal and vulgar minimalism.

“Cheap Thrills” stars Craig (Pat Healy), a recently unemployed mechanic and failed writer with a new born baby and an eviction notice.  Since he’s drowning in sorrows he decides to drown in some alcohol at the local bar. There, he runs into an old high school friend and part time leg breaker, Vince (Ethan Embry). Since they were both rotten hell-razors growing up, it’s easy for them to walk down memory lane. Little do they know, they’re being watched by a deranged married couple. Colin (David Koechner) and Violet (Sara Paxton) are out to celebrate Violet’s birthday and they’re looking to spare no expense to titillate their senses.

It starts off small. Colin’s willing to pay 50 dollars to the first person to take a shot.  Then it slowly escalates to 500 dollars to defecate in the neighbor’s house. Seeing Colin’s flippancy with his money, Vince decides to rob him. In one fantastic trophy reveal, Colin regains the control of the situation and reveals his true intentions. As it turns out, this has all been planned. Colin and Violet have been scouring the streets to find two guys to compete with each other for their amusement.  Colin and Violet have set aside 250,000 dollars for this event and they are willing to give the entirety of it away. With the stakes raised to life changing levels, so do the warped wagers.

“Cheap Thrills” is an expertly crafted black-comedy-thriller that relies on a simple yet captivating premise. Since the concept is fairly barren, the performers and script have to supersede expectation to reach its potential. Pat Healy is a fearless performer that is ironically perfect at projecting fear and self doubt. He has a short amount of time to have a full on “Walter White” level character arc and he pulls it off.  David Koechner displays that he can translate his comedic rhythm into insanity and Sara Paxton shows she can walk the line between delicate and sadist. 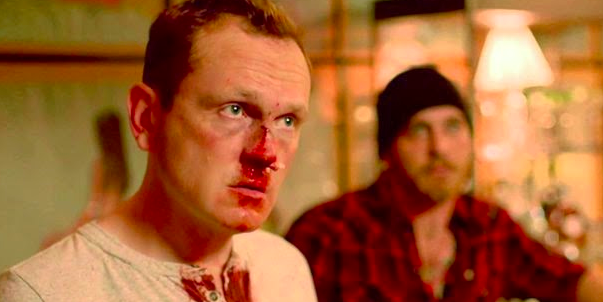 The pacing of this film is an exceptional example of delayed gratification. It’s a short film, just under 90 minutes, but it still takes time to hone its tension. It would have been easy to start with the more twisted wagers, but it would have been a cheap ploy. The movie has to gradually up the stakes for the audience to believe it. It allows characters to justify their actions as well as question and redefine their incentives. Since this movie is ultimately about creating circumstances to twiddle down decency, the audience is going to have to question, along with the characters, the price of dignity, pain, and humanity.

All-in-all, “Cheap Thrills” is an incredibly impressive first feature for E.L. Katz. He portrayed some great violence and maddening thrills, but never made them gratuitous.  Sometimes, we have to wait 45 minutes to see the monster. We should take some time to meet these characters so we can have an fully realize their sacrifice.